Math Fun: How Much Do You Weigh on Other Planets? 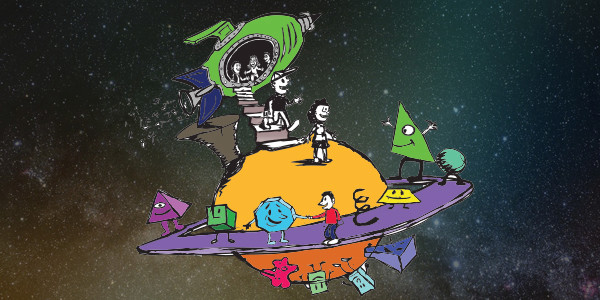 Have you ever wondered why astronauts can jump so high on the moon?

It’s because the force of gravity on the moon is lower than it is on Earth!

Simply put, gravity is the force that attracts two objects to each other. On a larger scale, our sun’s gravitational pull keeps neighboring planets in their orbits. The Earth’s gravity is what keeps our moon it its orbit as well! On a more personal level, a planet’s surface gravity is the force that literally keeps you down to Earth… or Mars… or Jupiter. It affects how quickly objects fall to a planet’s surface when dropped.

A planet’s size, mass (the amount of matter, or “stuff”, in an object), and density (how compact something is; for example, a rock is denser than a cotton ball) affect the strength of its gravitational pull. These variables are different for all planets in our solar system, which means that the force of gravity differs from planet to planet.

Weight is a measurement that expresses the force of gravity acting on an object. Because each planet has its own gravitational pull, it then follows that our weight would be different on each planet too!

You can use math to make your space-inspired daydreams just a little more real by calculating how much you’d weigh on other planets! Below is a list of other planets’ gravitational forces expressed proportionally (in comparison) to that of Earth’s (source). We’ve even included the moon and dwarf-planet Pluto.

Fun fact: Photos of astronauts floating around seemingly weightless in space may make you believe that there’s no gravity in outer space at all. The truth is, there’s a very small amount of gravity in space, which is referred to as “microgravity.” Learn more about microgravity here!